In golf, it’s rare to hit a shot that flies perfectly straight.

Even accurate shots that find the target usually curve a little to the left (a draw, for a right-handed golfer) or to the right (a fade).

Let’s take an in-depth look at draw vs. fade in golf – the what, how, the benefits and downsides of each.

All examples are from a right-handed golfer’s perspective; if you’re a lefty, simply reverse the direction.

What Is A Draw?

A draw is a shot that curves to the left. This happens when the ball’s “spin axis” – its tilt angle relative to the horizon – is to the left. (1) This is often referred to as left sidespin.

This tilt or sidespin is created when the clubface is pointed slightly left of the club’s path at impact. 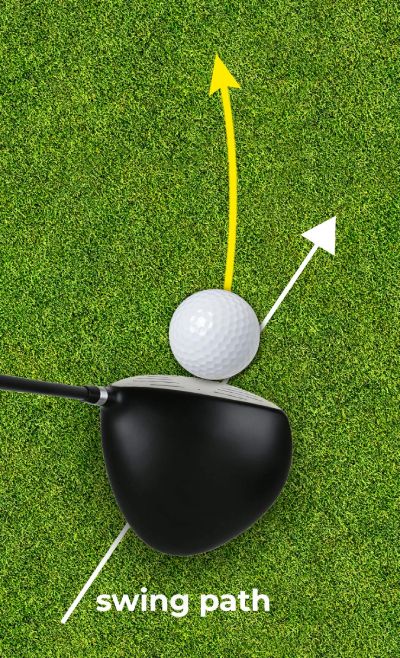 Usually, a draw starts right of the target. Some draws start directly at the target, while others actually start left, which is a pull-draw.

(Shots that take major left turns are called hooks, which we’ll discuss in a moment.)

With a driver, a draw might curve anywhere from 1 to 15 yards. With a shorter, more lofted club like an 8-iron, a draw might only bend 8 yards or so.

Benefits Of A Draw

The biggest plus to playing a draw is extra roll on tee shots. Draws tend to roll more than fades because draws have less backspin.

For much the same reason, a drawing shot usually flies lower and penetrates the wind better than a fade. A draw is less likely to “balloon” in a headwind and will lose less yardage than a fade hit into the same breeze.

Downsides To A Draw

Most golfers find it harder to play a draw vs. a fade. The swing mechanics needed to consistently draw the ball – such as an “inside-to-out” club path – can take longer to develop and build into muscle memory.

Also, a draw can easily turn into one of the most dreaded shots in golf – a hook.

Basically, a hook is a shot with an extreme leftward curve due to excess sidespin and very little backspin. That means it hits the ground even hotter than a draw, and often ends up deep in the woods or other trouble spots.

There are also situations where a draw is simply the wrong shot. For example, on a hole that doglegs (curve) to the right, a draw bends against the shape of the fairway and is more likely to find the rough.

How To Hit A Draw 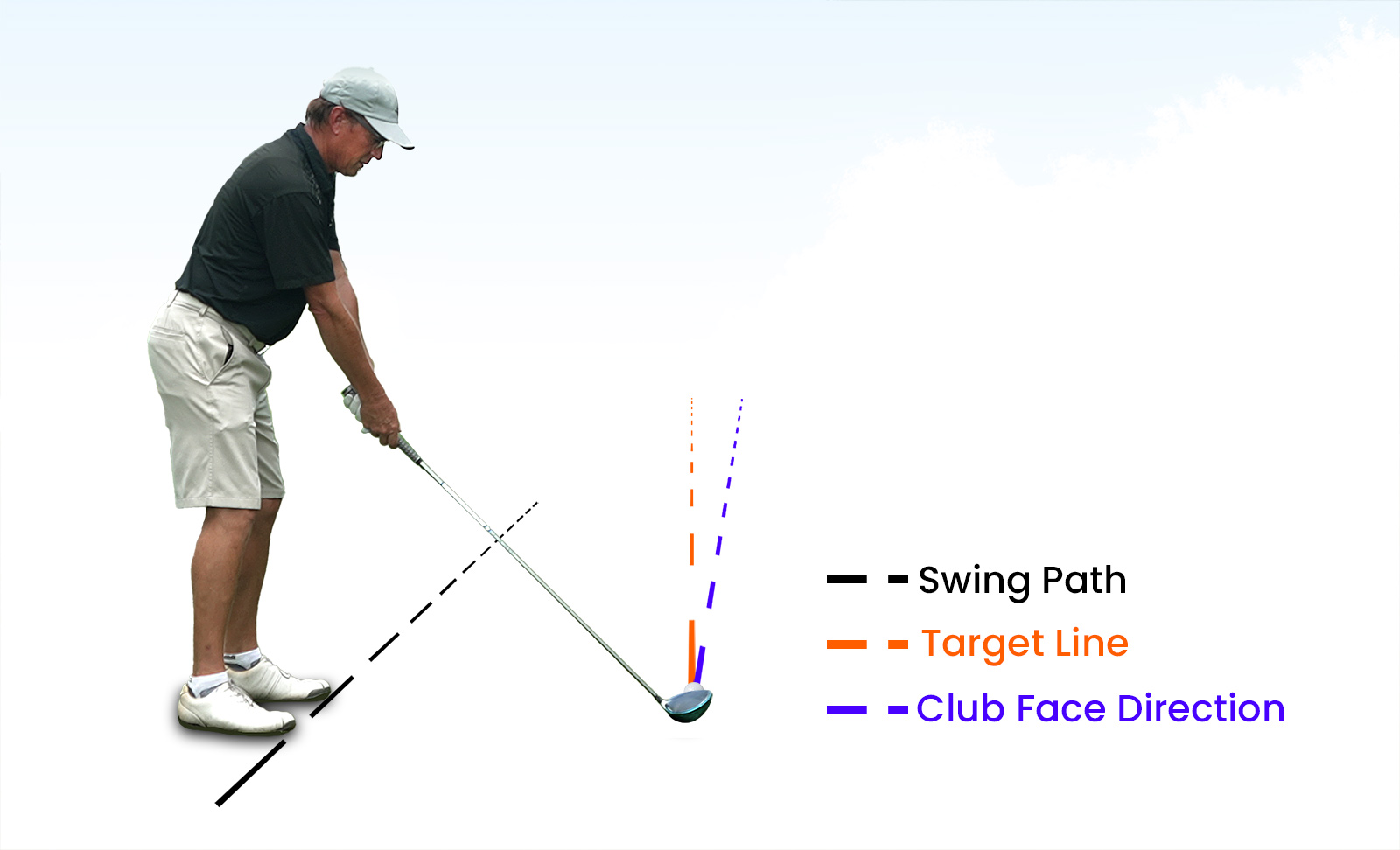 Here are the basic steps:

Be careful that there’s not a big difference in your clubface aim and your feet/body alignment. That will impart extra sidespin and possibly cause a hook.

When To Hit A Draw

Here are some scenarios where a draw is the best option:

What is a Fade?

This tilt or sidespin is imparted by a clubface that’s pointed slightly right of the club’s path at impact.

Fades generally start to the left of the target and bend back to it, which is ideal. Some fly straight at the target, or to the right, then curve. As long as it only moves a small amount, it’s still a fade and not the hated slice. (We’ll address those, coming up.)

A fade hit with a driver will curve between 1 – 15 yards. The shorter and more lofted the club, the less it will curve.

Benefits Of A Fade

Because it flies higher with more backspin than a draw, a fade is easier to control. It simply lands more softly and stops more quickly.

This is why most professionals prefer a fade vs. a draw off the tee. That’s especially true among the game’s longest hitters. Famous “faders” include Jack Nicklaus, Tiger Woods and Dustin Johnson.

As Lee Trevino, a six-time major winner who favored a left-to-right shot, famously said: “You can talk to a fade, but a hook won’t listen.” (2)

For most golfers, a fade is also much easier to play than a draw – especially with longer, less lofted clubs like the driver.

And while a draw rolls farther, a fade can provide extra carry distance thanks to its higher flight.

Downsides Of A Fade

Just as a draw can morph into a hook, a fade can become a slice – the most common miss-hit in golf.

A fade also doesn’t work well when hitting into a headwind. Its excess backspin creates a “ballooning” effect where the ball essentially climbs the wind and falls well short of the target.

Likewise, playing a fade in a left-to-right crosswind isn’t recommended; the wind will often push the ball way wide of the fairway or green.

Holes that dogleg left aren’t ideal for a fade, as the shot shape fights the fairway’s curve and can send the ball into the rough.

How To Hit A Fade

The basic steps are as follows:

There should only be a small difference between where the club is pointed and where your body is aligned. This keeps the shot from curving too much and becoming a slice.

When To Hit A Fade

A fade is your best bet in these scenarios:

Fade vs draw – which is better?

“Better” really depends on the situation; as explained above, sometimes a draw is the better option, while other times a fade is preferable.

Lots of coaches teach their students to favor one shot shape rather than try to master both. It’s easier to achieve consistency when you focus on perfecting a single shot type.

Do pros prefer to hit draws or fades?

With the driver, more pros play a fade since it’s easier to control – and while distance is important, they’ll trade a few extra yards for a few extra fairways.

Rory McIlroy is a good example. Long known for his massive, soaring draws, he converted to hitting mostly a fade off the tee in 2021. (3)

With the irons, most pros are able to work the ball in either direction based on what the shot calls for.

What is “draw bias” in a golf club?

Adjustable golf clubs, which allow the player to change the loft and weight distribution in the clubhead, can be tuned to promote a draw (and fight a slice).

To make a club “draw biased,” more weight is placed in the heel section, closer to the shaft. This lightens the toe section and allows the golfer to release (roll over) the club more easily through impact, which imparts leftward spin.

Learning to control the curve of your ball is a skill you must develop if you want to shoot low scores (below about 85). Golfers who shoot in the 70s or better intentionally curve most shots they play from beyond 130 yards or so.

So, draw vs. fade – should you a) favor one over the other, or b) try to develop the skill to hit both? Ideally, the answer is “b.” But it’s much simpler to learn a single shot first before trying to master two.

Your best bet is to work with a PGA-certified teaching pro to decide which way to go.

Article by Brixton Albert
Brixton became obsessed with golf when he was 10 years old, after watching Tiger Woods win the 1997 Masters. He ended up becoming a scratch golfer and playing Division 1 golf in college.

He then went on to create PerformanceGolf.com with the mission to help 1 million amateur golfers play the best golf of their lives, and enjoy every minute of it.
References
You Might Also Like:

Golf Beginner Tips
How To Play Golf: The Ultimate Guide To Golfing For Beginners
By Brixton Albert